The new game by Klaus-Jürgen Wrede, Carcassonne Südsee, does not include a Scoring track. The fact that the dynamics of the game consists not in points but in obtaining products makes it possible. However, at the end of the game you need count the points of each player (by ships and wares) and that's because some defend the usefulness of a marker.

But precisely the non-existence of a Scoring track gives Carcassonne Südsee an additional difference with the original version. Players don't know the provisional game situation since they have to put the Ships upside down. The uncertainty that is generated is interesting with respect to the basic Carcassonne.

We have use the Elimination of Scoring track in Carcassonne Südsee as an excuse to analyze it carefully.

The Scoring track represents a path between the walls of Carcassonne that the followers must travel. In this race to the palestra (area between the inner and outer wall) the more advanced followers correspond to higher scores. It's very easy to observe the order and the differences between the players since everything is represented by the position of the followers.

However we found very interesting the great difference between the distances between some boxes which has led us to the study we show below.

We have analyzed the marker representing each box by its central point. The idea is perfectly clear in the following image. 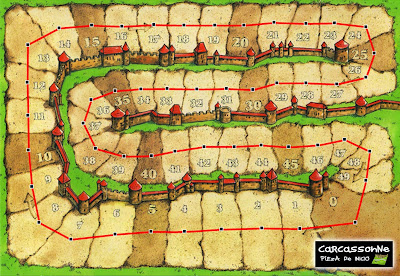 We have measured the distances between adjacent boxes. Already at first sight it is observed as the distance between the first cells is much greater than between the central squares.

The result of these measures is shown in the following graph, which is observed as the separation is decreasing. At the beginning it presents values environment 4 cm (1.6 inches) while that will later be stabilizing in 2.5 cm (1.0 inches) approximately. 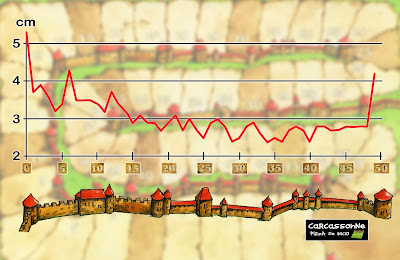 These different separations affect visual perception of how the game goes.

Suppose that the difference in score between two players is just 5 points. The distance that separates their followers isn't always equal since it will depend on the existing score. If the players had 0-5 points the separation of the followers would be 19.7 cm (7.7 inches) while if scores are 33 and 38 points the physical distance would be only 12.6 cm (4.9 inches).

The following graphic shows how it is by changing the distance between two followers whose separation is 5 points. 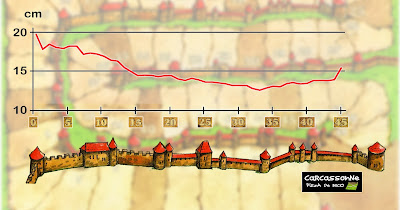 This mathematical study may explain why players get nervous when opponents begin to score and they continue in position 0. At the beginning a few points difference translates into a very large physical separation.

To conclude this part of the analysis of the Scoring Track we show you some pictures to illustrate everything mentioned above. In this first image each of the followers has a difference of 10 points from the previous and following. However, the physical distance between the black and yellow is much greater than between the green and red. The black player might think that yellow has escaped and will be difficult to give scope while the green may have the feeling of being very close to red. In both cases the separation is 10 points. 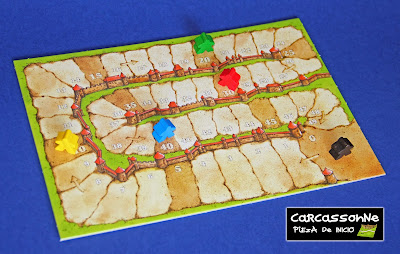 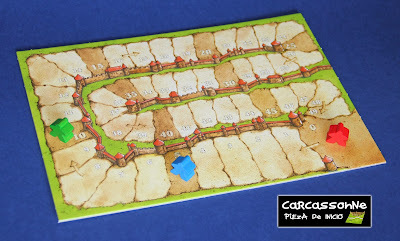