Our third article about Scoring track analyses the different options that exist to indicate that a player has already completed, at least, a whole scoring track round. In almost games, there are players who end up getting more than 49 points by which the Scoring track is too small and the follower begins a second round.

The following image shows the development of a game in which green player is located in the first round (45 points), orange player, with his lying follower, in the second round (50 + 32 = 82 points) while the blue player, with his follower upside down, has just started his third round (100 + 3 = 103 points). 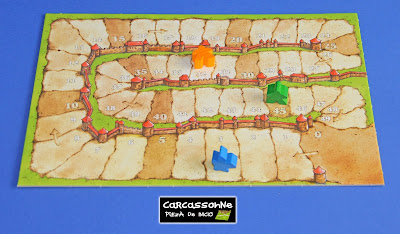 With the publication of the first expansion of Carcassonne, Inns and Cathedrals, emerged a new option to solve this problem. Reversible tiles 50 and 100 points given point count. Sometimes it's confusing because you have to gather the information from the Scoring track with tiles having each player. 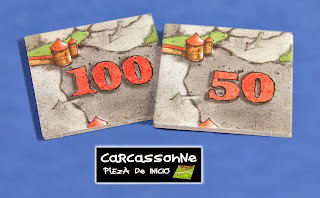 The content of this article comes from an idea contributed by a member of Carcassonne Central and whose image appeared posted on the facebook page of this community on 28 September. A numbered faces dice is used to simplify the reading of the score of each player instead of a follower. In this case every dice is numbered from 0 to 9. You can find them at CHESSEX. The number corresponds to the number of laps completed. You have to add x*50 points to the space score. 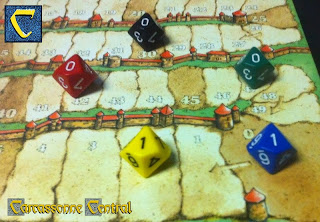 We have far-fetched dies of this type in Spain and we have only found dice whose numbering starts at 1. In this case the dice would indicate the round in which each player is located. Green player (1) is located in the first round, orange player (2) is located in the second round so it would have to add 50 points. Blue player (3) is in the third round so he has to add 2 * 50 = 100 points. 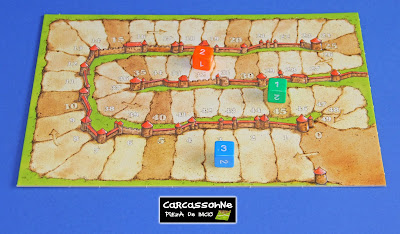 Carcassonne, Starting Tile wants to help with an additional contribution. These special dice present on its six faces a follower and notes of 50, 100, 150, 200 and 250 points. Follower and scores appear in the color of the player and it has been used a type of letter similar to that used on the scoreboard and in 0 and 100 points tiles. 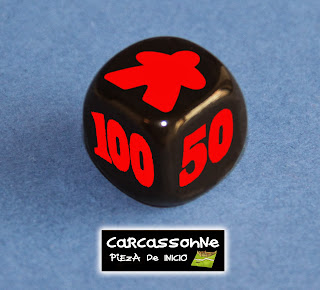 It is easy to perceive the score of each player. If the shown face is that of the follower it means that the player is in the first round. Otherwise the dice indicates the score that should be added to the corresponding to each spaces. 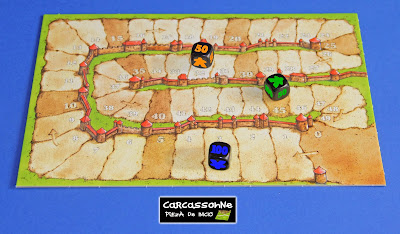 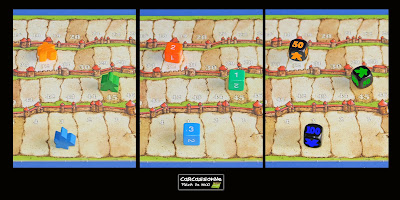