Jim Parsons wins again the Emmy Awards. Just receive his third award for the role of the physicist Sheldon Cooper on The Big Bang Theory. The award, is undoubtedly shared with screenwriters and companions, critical to the ultimate success of the author. 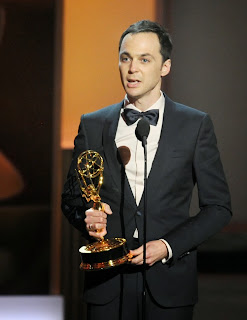 Perhaps it is time to add one more tile to the basic Carcassonne. Sheldon convinces anyone that 73 is the best number.

The great advantage of having 73 tiles consist of one cast more regular shifts during a game of Carcassonne. Taking into account that begins with the already placed start tile would be 72 tiles instead of 71.

71 tiles do not generate the same number of shifts for 2 players, 3 players, or 4, or 5, or 6, or... 71 is not divisible by any other lower number. There will always be players who will place more tiles than others which is an advantage for them to be added to the fact that they are the first to place.

With 73 tiles would be 72 per place among all players and this would generate equal turns in games by 2, 3, 4, and 6 players. Only 5 players case remains unsolved. In the table below we show the number of tiles to be placed for each player with 72 and 73 tiles. 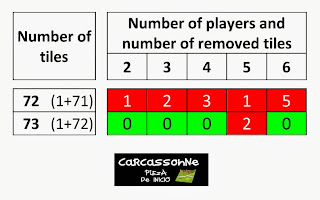 We don´t like this variant. Even though all players know the removed tiles it can have some influence on the game. It would be equivalent to removing a stages of the Tour de France (cycling). If you delete a piece of monastery with road it is as if were eliminated a mountain stage. Like a climber, a player that supports part of his game is this type of tiles could be harmed.

Regardless of our opinion about this variant it is clear that with 73 tile problem is much lower since only would have to remove two pieces of territory in 5-player games.

Mathematically, it is easy to reach the conclusion that getting regular shifts in games from 2 up to 6 players should be playing with a number of total 61, 121, 181, 241,... tiles.

The number of 72 tiles have a foundation of development of the game. The basic game includes 6 sheets with 12 tiles each. Prepare a 73 distribution would force to deliver a tile separately.

There are also players who do not employ the piece of home. They insert the 72 tiles into a bag and they removed them at random. Using a bag prevents the problem by the revers start tile.

We prefer to leave it as it is. The start tile on the table and 71 tiles to place.